Pluma Fronteriza is back home in El Paso. The move was made at the turn of May and June.

It is good to be back home. Pluma had been in Oak Park in Overland Park, Kansas. Just after we left, a young girl was kidnapped and murdered just a few blocks from us.

It made national news and deeply saddened us.

Since arriving I've been working underground to see what the status of low-income worker in El Paso is.

My brother had gone to see "300" at Montwood Theatre shortly after we arrived in El Paso. Last week we drove by and the sign said "closed permanently." Montwood theatre was old and the equipment was old. I remember it had this long hallway to the east of the theatre that survived all the remodeling over the years. I remember walking down the hallway to the cinema to see "Star Wars" back in the 1970s. I really don't remember the movie much, but I remember that hallway for some reason.

Montwood Theatre had a arcade nextdoor called the Detour. The cinema had this ranch style look before, then it was remodeled in the late 1980s and made classy with lights and guys in hats. The three main theatre's survived and they added 4 smaller ones. It was still $1 to get in. During middle school, Montwood was the place to hang out. It was within walking distance from Eastwood Middle School, my girlfriend's at the time, and many other friends.

But the nights at Montwood began brewing fistfights and other trouble and someone cracked down. No loitering was allowed and I think business slumped. Once a great while I was return. The last time, was when I saw "Enemy at the Gates." The air conditioner was not working, so that made it really fun.

As much as antiquated it was, Montwood Theatre will be missed.

PART OF THE WORLD (Calamari Press 2007 ISBN: 978-0-9770723-8-5), Robert Lopez
Fiction. PART OF THE WORLD is a fugue in both a musical and psychological sense. It is a canonical juggernaut of lyrical language--ever dissolving, devolving, shifting, then reconstituting
itself into a new knowledge of reality. This language comes straight from a compulsive mind in a Quixotic state--ceaselessly harping on the everyday perturbations and peculiarities of our humdrum lives--our cars, apartments, health, finances. But if you relax your focus as if staring at some sort of holographic fractal, with each part containing the whole, the superficial meaning is purged, layer by layer, peeling back and revealing the subtext of what the mind is capable of under the burden of trauma and accountability. "Robert Lopez has written a darkly hilarious exploration of the trickery of memory, the unreliability of personal history, and the strangeness,
even uncanniness, of our daily transactions"--Dawn Raffel. "Literary pleasures like this are all too uncommon"--Laird Hunt
http://www.spdbooks.org/Details.asp?BookID=097707238X


PONCIA VICENCIO (Host Publications 2006 ISBN: 978-0-924047-34-3), Conceicao Evaristo. Translated from the Portuguese by Paloma Martinez-Cruz. The story of a young Afro-Brazilian woman's journey from the land of her enslaved ancestors to the emptiness of urban life. However, the generations of creativity, violence and family cannot be so easily left behind as Poncia is heir to a mysterious psychic gift from her grandfather. Does this gift have the power to bring Ponci back from the emotional vacuum and absolute solitude that has overtaken her in the city? Do the elemental forces of earth, air, fire and water mean anything in the barren urban
landscape? A mystical story of family, dreams and hope by the most talented chronicler of Afro-Brazilian life writing today. http://www.spdbooks.org/Details.asp?BookID=0924047348


Vegetable Dreams / Huerto soñado by Dawn Jeffers (Raven Tree Press) has been chosen for inclusion in the prestigious Bank Street College of Education’s 2007 edition of The Best Children’s Books of the Year. Bank Street College of Education is located in New York City and their Children’s Book Committee issues an annotated handbook of children’s books they believe to be the best publications of the prior year.

Considered a guidebook for parents, teachers and librarians, the listings include fiction, nonfiction and poetry titles which are arranged into sections by age and topic. The Children’s Book Committee receives more than 4,000 titles a year for consideration and possible inclusion in their guidebook.

Vegetable Dreams / Huerto soñado has also received the Midwest Book Award for Children’s Books, BWI’s Top Pick and is included on the Brodart Español Recommended Book List.
Posted by Raymundo Eli Rojas at 9:29 AM No comments: Links to this post 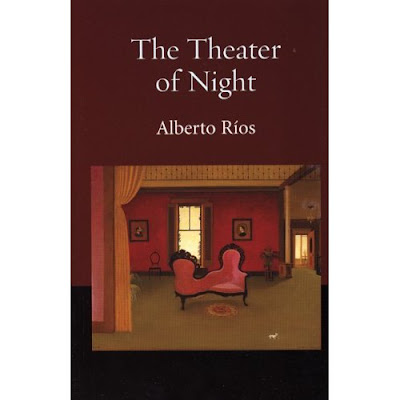 In THE THEATER OF NIGHT Arizona poet laureate Rios writes a lifelong love story that unfolds along the Mexican-American border.

His poems trace the lives and loves of an elderly couple through their childhood and courtship to marriage, maturity, old age, and death. Rios' narratives are both surreal and hyper-real, creating the hard, sweet weave of two lives becoming one. "Rios' verse inhabits a country of his own making, sometimes political, often personal, with the familiarity and pungency of an Arizona chili" The Christian Science Monitor.