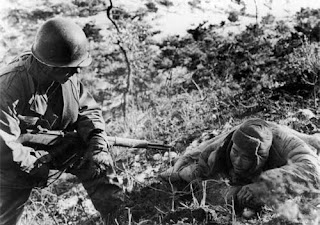 "What made made you want to move from Kansas to El Paso?"
"After being in Korean, I never wanted to live in the cold again."
- quote from one of my friends 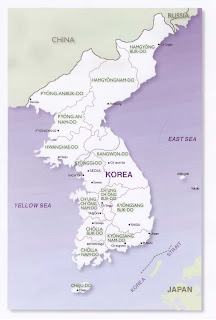 The Vietnam War surge in Chicano Lit
In the last 1990s, there was an explosion of books by Chicano(a) authors dealing with the Vietnam War. From Charley Trujillo's Soldados: Chicanos in Viet Nam and Dogs of Illusion, to Alfredo Vea, Jr.'s The Gods Go Begging, Stella Pope Duarte's Let Their Spirits Dance, Diego Vasquez, Jr.'s Growing through the Ugly, House with Two Doors by Ricardo Pimentel, Humidity Moon: Short Stories of the Vietnam War by Michael W. Rodríguez; Shifting Loyalties by Daniel Cano, Six Silent Men by  Rynell Martínez, A Patriot After All by Juan Ramirez among others.
I even published a paper in Dialogos about the Vietnam War and Chicano(a) Literature focusing on all the different genres of literature (poetry, short stories, teatro).
And these were novels, there are a host of short stories  and teatro that involve the war. Jorge Mariscal also put out a book Aztlan and Vietnam which analyzes various Chicano writing on the war.
Writers focused on the Vietnam War before and after the late 1990s, but the proliferation of publishing in those five years was tremendous.
The glut on this topic may result from the Chicano Movement occurring during the Vietnam War and many veterans and family members, by the late 1990s, were ready to talk about the war.

Chicano Writing and Korea: Lacking
Because the Korean War falls before the Chicano(a) Renaissance in literature, Chicano(a) writers have focused very little this war in our literature.
So just off the top of my head, I'll try describe some book I recall that focus on the Korean War. As the 60th Anniversary of the start of the war is today, it's time our stories on this era come out. 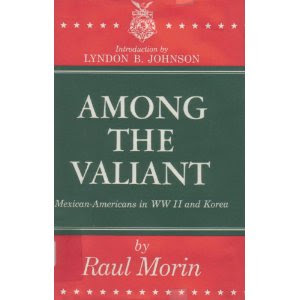 Among the valiant: Mexican-Americans in WW II and Korea
Raul Morin
1966
Like Charley Trujillo's book Soldados, publishers would not pick up Among the Valiant (Trujillo's book became an award-winning one). Morin pieced together many stories of Chicano veterans and medal winner into this heroic collection of narratives.
After he could not find a publisher, the American G.I. Forum pitched in to assist him to publish the book. The Morin family was trying to get the book republished some years ago. I'm not sure how it turned out.
Pillars of Gold and Silver by Beatriz de la Gárza focuses on a mother and daughter in the aftermath of their father's death in the Korean War. I have not read the book. A late 1990s Arte Publico publication, the review I've found online are not very flattering. 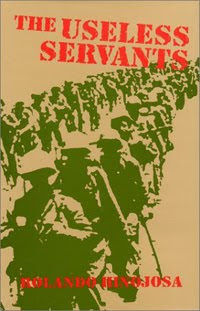 The only book I know that gives a total Chicano focus on the Korean War is The Useless Servants by Rolando Hinojosa. Part of his Rafe Buenrostro series, below if the review from Publishers Weekly:
"The timeless truths of war -- the slaughter of civilians, atrocities condoned, legions of refugees -- are related with near-documentary realism in this powerful novel of the Korean War.
Told in the form of a journal kept by Rafe Buenrostro, a Mexican-American soldier from Texas, it also portrays the social dynamics of this particular conflict.
Through his protagonist's voice, Hinojosa ( Rites and Witnesses ; Partners in Crime ) draws on his own experience in Korea to reveal the racism that Mexican-Americans faced from fellow soldiers.
Buenrostro's tense, fragmentary diary entries expose combat's seamy underside: black troops kept in segregated units (though they would later fight alongside whites); thousands of Korean civilians shot to death in unacknowledged barbarism; Marines massacred after being issued old, inaccurate survey maps; napalm and fragmentation bombs giving an eerie foretaste of Vietnam.
As the corpses pile up, those left standing begin to fear they will go crazy: one lieutenant does snap, committing suicide. Though his diary entries preclude developing a plot in the conventional sense, Hinojosa gives us a graphic picture of the unchanging face of war--raw, gritty and inhumane."
One of the most interesting books on the Korean War and Chicanos falls into the Literatura chicaniesca catagory. 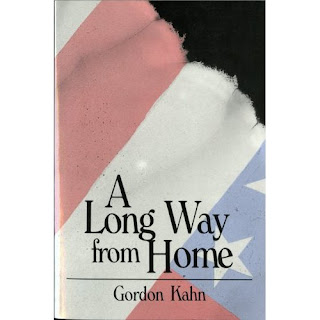 A Long Way From Home by Gordon Kahn.
Bilingual Press, 1989 (republished)
The story focuses on a Chicano draft dodger and paints the Korean War as imperialistic and profit driven.  Kahn was an expat in Mexico and was blacklisted in the U.S. and fled to Mexico because he refused to testify before the Committee on UnAmerican Activities:
Set during the Korean War and McCarthy eras, this novel tells the story of Gilberto, a young Mexican American who, after his mother's death on the eve of his induction into the U.S. Army, decides instead to leave the country and travel into Mexico to find his only remaining family. Gordon Kahn (1902-1962) was an important Hollywood screenwriter until he was blacklisted for his independent political opinions. - Publisher Description
If you know of any other books by Chicana(o)s on the Korean War or the Korean War plays a part, send us a comment.


Korean El Paso
For El Paso, the Korean War is important. After the war, the Korean population in El Paso began to grow. Many soldiers brought back war brides, and many soldiers still marry Korean women and bring them to El Paso and subsequently decide to settle here.
Any drive to the northeast side of town, one can see the English-Korean translations on signs, the Asian supermarkets, and more.. The Korean shop owners of Downtown are a powerful lobby and one of the most vocal against the landgrab of Downtown and the Segundo Barrio. There are three Korean protestant churches. Check out this article by David Romo which was published on The Newpaper Tree: Voices of Dissent: Little Seoul in El Paso.
Also check out the entry for "Koreans" in the Texas Handbook Online. According to the ALA, Korean is the fifth most spoken language in El Paso County after Spanish, English, Chinese, and German.
Well, I'm off to Ruidoso, NM for the weekend. Have a good one...

Posted by Raymundo Eli Rojas at 12:00 AM

Very informative! Do you know any Chicano fiction that focus on WWII? I'm working on my dissertation which deals with American ethnic writers and WWII, and I'd appreciate it if you could tell me what you know about this topic. Thank you.

My apologies. Since were are not an active blog anymore, I'm tardy in my response. I thought I had posted an article on WWII and Chicano Literature on the blog. Try searching for it. If not, email me at rayerojas@gmail.com.