QUESTIONS FOR THE DEAN
Felipe Ortego y Gasca
The following in our series in questions we pose to the Dean of Chicano(a) Literary Criticism, Felipe Ortego. 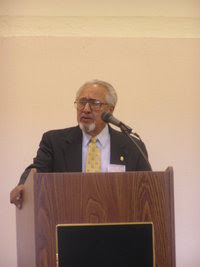 When I first saw it, I thought it was Islas parodying Salinas poem, but upon comparison to Salinas' original -- it is exactly the same poem. Aldama even analyzes the poem in his critical introduction to the book.

I am probably not the first one to notice this, so I've written Arte Publico Press and the University of Califas Press to inquire.

So that this does not ignite an El Paso-Fresno turf war, and to call off the bulldogs, I'd say Salinas' poem was probably in a box of Arturo Islas' papers and mistakenly attributed to him. The poem in Islas' book is dated circa 1974 and Salinas published "Aztec Angel" in 1970. As for me, I still prefer Buddy Guy's "Black Angel." However, beware of the Stanford Mafia!

Negotiation Within Domination: New Spain's Indian Pueblos Confront the Spanish State
[Hardcover]
University Press of Colorado (July 2010)
ISBN-10: 1607320320
Ethelia Ruiz Medrano
Susan Kellogg
This book examines the formation of colonial governance in New Spain through interactions between indigenous people and representatives of the Spanish Crown. The book highlights the complexity of native negotiation and mediation with colonial rule across time, culture, and place and how it shaped colonial political and legal structures from the sixteenth to the eighteenth centuries. Although indigenous communities reacted to Spanish presence with significant acts of resistance and rebellion, they also turned to negotiation to deal with conflicts and ameliorate the consequences of colonial rule. This affected not only the development of legal systems in New Spain and Mexico but also the survival and continuation of traditional cultures. Bringing together work by Mexican and North American historians, this collection is a crucially important and rare contribution to the field. This is a valuable resource for native people as they seek to redefine and revitalise their identities and assert their rights relating to language and religion, ownership of lands and natural resources, rights of self-determination and self-government, and protection of cultural and intellectual property. It will be of interest primarily to specialists in the field of colonial studies and historians and ethno-historians of New Spain.
The Conquest All Over Again: Nahuas and Zapotecs Thinking, Writing, and Painting Spanish Colonialism
[Hardcover]
Sussex Academic Press (July 2010) 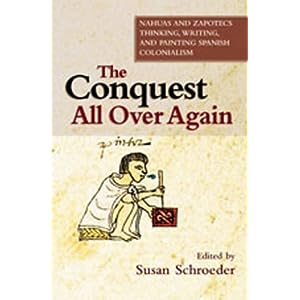 ISBN-10: 1845192990
Susan Schroeder
The Spaniards typically portrayed the conquest and fall of Mexico Tenochtitlan as Armageddon, while native peoples in colonial Mesoamerica continued to write and paint their histories and lives often without any mention of the foreigners in their midst. Their accounts took the form of annals, chronicles, religious treatises, tribute accounts, theatre pieces, and wills. Thousands of documents were produced, almost all of which served to preserve indigenous ways of doing things. But what provoked record keeping on such a grand scale? At what point did pre-contact sacred writing become utilitarian and quotidian? Were their texts documentaries, a form of boosterism, even ingenious intellectualism, or were they ultimately a literature of ruin? This volume seeks to address key aspects of indigenous perspectives of the conquest and Spanish colonialism by examining what they themselves recorded and why they did so.

Atopula, Guerrero, and Olmec Horizons in Mesoamerica
(Yale University Publications in Anthropology) [Paperback]
The Yale Peabody Museum (July 27, 2010)
ISBN-10: 0913516104
Between the Fences: Before Guantanamo, There Was the Port Isabel Service Processing Center (Seven Stories Press) [Paperback]
Seven Stories Press (July 1, 2010)
ISBN-10: 1583229124
Tony Hefner
Something at the Texas detention facility is terribly wrong, and Tony Hefner knows it. But the guards are repeatedly instructed not to speak of anything they witness. In the Rio Grande Valley, one of the most poverty-stricken areas in the United States, good jobs are scarce and the detention facility pays the best wages for a hundred miles. The guards follow orders and keep quiet.
For six years, Tony Hefner was a security guard at the Port Isabel Service Processing Center, one of the largest immigration detention centers in America, and witnessed alarming corruption and violations of basic human rights. Officers preyed upon the very people whom they are sworn to protect. On behalf of the 1,100 men, women, and children residing there on an average day, and the 1,500 new undocumented immigrants who pass through its walls every month, this is the story of the systematic sexual, physical, financial, and drug-related abuses of detainees by guards.
The Port Isabel Service Processing Center continues to hold detainees of the US Immigration and Customs Enforcement whose immigration statuses or citizenship have not been officially determined or who are awaiting repatriation. On April 22, 2009, detainees there began a hunger strike, alleging violations of due process, inadequate access to medical care and legal resources, and various other abuses.
Questioning the Cuban Exile Model: Race, Gender, and Resettlement, 1959-1979
(New Americans: Recent Immigration and American Society) [Library Binding]
LFB Scholarly Publishing LLC (July 2, 2010)
ISBN-10: 1593323883 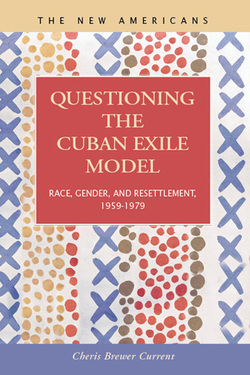 Cheris Brewer Current
Utilizing an interdisciplinary approach, Current offers a fresh approach to a topic that has received a fair amount of attention. She questions traditional narratives on first and second wave Cuban immigration that construct a monolithic Cuban experience and identity. This traditional singular identity and experience is the basis of the Exile Model, which presents Cubans as overtly political, highly educated, universally white, economically successful, residents of Miami, and martyrs of Castro's revolution. This oversimplification ignores the structural assistance that facilitated the Cuban success story, the racial and economic plurality of Cuban immigration, and the existence of Cuban communities outside of Miami.
Frontiers, Plantations, and Walled Cities: Essays on Society, Culture, and Politics in the Hispanic Caribbean (1800-1945)
[Hardcover]
Markus Wiener Publishing Inc; 1ST edition (July 15, 2010)
ISBN-10: 1558765115 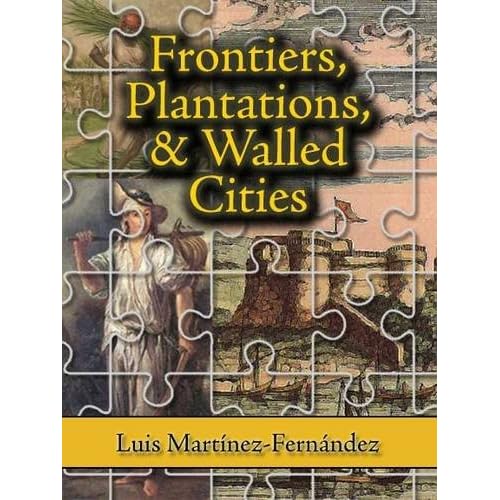 Luis Martinez-Fernandez (Author)
In the nineteenth and twentieth centuries, the Hispanic Caribbean was fundamentally a plantation economy dominated mainly by the world sugar market. The politics were shaped by revolutions, political coups, wars, and elections, resulting in an end of Spanish power, independent states, and the domination of the region by the United States. These developments led to changes in social values. The author follows these developments throughout the main Hispanic islands and provides a fascinating picture of a region in turmoil.
EL PASO WRITERS UPDATE
Ricardo Aguilar in Translation
I recently ran across the following link on Luis J. Rodriguez' books: click here. The late Ricardo Aguilar translated several Chicano titles during his lifetime, including Rodriguez' Always Running and Denise Chavez' Loving Pedro Infante. Also, he translated the Chicano classic Road to Tamanzunchale. If you recall anymore, please let us know.
Prime Rib with Joe Olvera
As we mentioned a few weeks ago, veteran reporter, poet, and playwright, Joe Olvera will be roasted this coming Saturday. He was also honored by the City of El Paso this past Tuesday with the Conquistador Award, the city of El Paso's highest honor. Read the El Paso Times clip. Here is another story on the topic: Former Reporter Receives City's Highest Honor. If you are in El Paso on Saturday, make sure to attend his roast at Mercado Mayapan. The event info is on the Literary Events list on the left side of our blog. Joe published his book of poetry with Mictla Publications in the 1970s. Mictla was the press that Ricardo Sanchez was a part. He was El Paso's first Chicano newscaster and wrote for the El Paso Times and El Paso Herald-Post.
Blog Updates
C.M. Mayo is running a concurrent blog to her Madame Mayo blog called Maximillian and Carlota. She posts every Tuesday and says the blog is a "resource for of the tumoltous period of Mexican history known as the Second Empire or French Intervention." See it now. The Diversity
Media blog posted a video of Luis J. Rodriguez reading poet to the classic song "La Llorona" at the the Border Book Festival (2009). See it now. You can also pick up this video on Youtube.
Also, see Deborah Batterman's guest post on the Madame Mayo blog: Guest-Blogger Deborah Batterman: "Self Publish (?) or Perish: 5 Links on the New Digital Imperative"
While we are on C.M. Mayo, check out Book Readers Central blog for a review of her book Last Prince of the Mexican Empire.
Rafael Jesus Gonzalez posted anew on Wednesday, which includes some poems, one published in El Grito in the early 1970s: Hart Crane (July 21, 1899 - April 27, 1932)

Sheryl Luna tells us her poems are included in New Poets of the American West: READ MORE.

Stage Reading of "Pastures of Heaven" in Salinas, CA Aug. 7-8
The Steinbeck Festival will present two staged readings of scenes of the new play, "Pastures of Heaven," followed by a discussion and talkback with the actors and acclaimed creators Octavio Solis and Jonathan Moscone.
Premiered in June, this brand-new, richly theatrical play was developed in collaboration with Word for Word Performing Arts Company.
The play celebrates the art of storytelling as it depicts comic and heartbreaking characters in search of happiness in the seemingly idyllic landscape of Steinbeck’s own Salinas Valley, known around the world as the “Pastures of Heaven.” For tickets to the performance in Salinas, visit steinbeckfestival.org. For more information on CalShakes and the Pastures of Heaven production, see www.calshakes.org.
Trivia on John Rechy: Description of Pershing Square and Big Table 3

The LA Times blog posted some interesting trivia on El Paso native John Rechy. In a post by Larry Harnisch: "If you read Norman Mailer’s article for Esquire on the 1960 Democratic National Convention, you might notice a description of Pershing Square by John Rechy and wonder “What’s Big Table 3?” Thanks to EBay, I now have a copy of the magazine and here’s the answer." READ MORE.

BUENO GENTE, a DIFFERENT SIDE OF CHICANO(A) LIT, THIS WEEKEND AND MORE NEW BOOKS
=======
The link we share with you today is: Legal Momentum
Your calo juarense for today is: guillermo - Menso - stupid
-- Glosario del Calo de Cd. Juarez, Ricardo Aguilar Melantzon

Posted by Raymundo Eli Rojas at 6:08 AM