THE CHAPBOOK &
THE SURVIVAL OF
CHICANA(O) LITERATURE
The chapbook is important to Chicano literature in that it made us survive.


What could be called the “second wave” of the Chicano Chapbook Series involved more from Gary Soto and came out in the late 1990s. He states that had become more selective. Writers had to be under 35 and had to have a college degree. He felt the college degree filtered out some of the lesser-quality manuscripts. Among the well-known writers we see today that got published in that second wave include; Rich Yanez, Michael Jayme, Neomi Sanchez, Manuel Munoz, Rigoberto Gonzalez, Francisco Aragon, and John Olivares Espinoza. 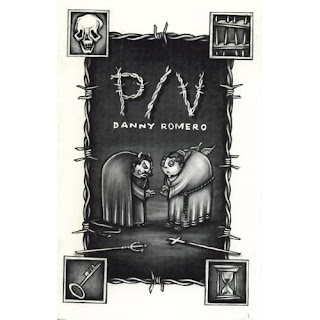 (above) Chicano Chapbook Series title
Looking at Rich Yanez' Sacred Heart, the chapbook is staple bound of four 8 ½ X 11 pages with a 8 ½ x 11 cover on harder paper. What is beautiful about the Chicano Chapbook Series and other series like it, they did not try to overdo the chapbooks. An artist was used to do some art, maybe include an introduction and title page, the poetry or he short story, and that was it. That was it – basic. No prize in the Cracker Jack box, no glossy cover.
The Chicano Chapbook Series was not the only chapbook publisher. Calaca Press and Red CalacaArts Publications would put out a series beginning in the 1990s targeted at Chicano(a) writers. Francisco Aragon would run a chapbook series through Momotombo Press. Other presses that published Chicano(a)s were Red Wing Press, Moving Parts Press, and Pudding House Press.

Moving Parts Press/Chusma House chapbook by the late Alfred Arteaga
Moving Parts, who published Alfred Arteaga, Elba Rosario Sanchez, as well as two compendiums of poetry illustrated by Jose Antonio Burciaga, also published some hard-core, more complex publishings like CODEX ESPANGLIENSIS from Columbus to the Border Patrol by Guillermo Gómez-Peña. This was not a chapbook, but I just thought I would throw it in (if you have not seen it, there's a copy at Special Collections in the UTEP library unless it was on lone). 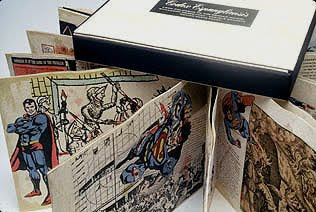 Moving Parts Press CODEX ESPANGLIENSIS
The RedCalaca Arts series would be a more radical series then the Chicano Chapbook Series publishing writers such as Raymond R. Beltran, Sara Rebeca Duran Garibay, Olga A. Garcia, and Sandra C. Munoz. I can say they were popular among Chicano(a) student activists, as I was one at the time and the activism and human rights direction that RedCalaca pushed was a breath of fresh air.
Swan Scythe Press would publish several Chicano and Latino writers, though not necessarily focusing on Chicano and Latino writers. These included John Olivares Espinoza and Maria Melendez. M&A Editions published several chap books. Co-founded by Angela de Hoyos it published such writers as Trinidad Sanchez, Jr. Wings Press also runs a series called the Whitebird Chapbook Series. 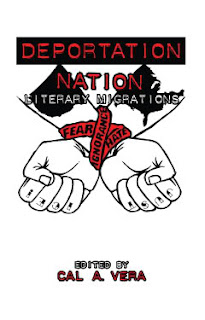 Calaca Press chapbook
There are so many more to mention, but most other chapbook series are not necessarily dedicated to publishing Chicano(a)s, and I will probably get some chastising from friends from not mentioning their press or books, but oh well. Please view my Sunday Press Spotlights of the last few weeks to see more on City Works Press and Mouthfeel Press.
The chapbooks keep our literature alive, it rebels against the establishment (even our own), it's cheap, and it bring to light new authors.
But as you have seen, there is always someone to go through, even when publishing a chapbook. Whether it be a small press, a generous writer's publishing a series, a university press editor -- there is always some type of barrier -- for good or bad or the ugly.
So my question and follow up are: Why go through that barrier? And why you should...
To be continued...
Share
Posted by Raymundo Eli Rojas at 3:00 PM

20 Young Writers Earn the Envy of Many Others

Speaking of The Good, the Bad, and the Ugly, check out Ennio Morricone's relationship to El Paso on an archived blog post:
http://plumafronteriza.blogspot.com/2007_02_01_archive.html

I just came across your website while searching out the whereabouts of Encanto Chicano (1971) by Javier Gálvez –– a book (or chapbook) that seems out of print. I became interested in Gálvez after reading a poem of his, “This Morning,” in Fine Frenzy: Enduring Themes in Poetry, 2nd ed., 1978, McGraw-Hill Book Company. Where the reference-source for “This Morning” (that is, Encanto Chicano) inexplicably failed to show up in the Acknowledgments section of that poetry anthology.

Anyway ... have you any information about Javier Gálvez, in particular as to whether it might be possible to still find a copy of Encanto Chicano?