Violence by and against youth continues to be one of the most challenging subjects facing criminologists.
In this comprehensive and integrated analysis of the interrelationships of youth violence, violent victimization, and gang membership, Finn-Aage Esbensen, Dana Peterson, Terrance J. Taylor and Adrienne Freng seek to understand what causes youth violence and what can be done about it.
Using the results from an inclusive study they conducted of eighth-graders in eleven American cities, the authors examine how the nature, aetiology, and intersections of youth violence are structured by both sex and race/ethnicity. Youth Violence is pertinent to juvenile justice policy considerations.
The authors frame their discussion within the public health perspective, focusing on risk factors associated with violent behavior. The findings address prevalence and incidence, as well as the demo-graphic correlates and cumulative effects of the risk factors associated with engagement in violence. Ultimately, the theories and research methodologies here are essential for understanding the dynamics of youth violence.
Massacre at the Yuma Crossing: Spanish Relations with the Quechans, 1779-1782
[Paperback] University of Arizona Press (September 1, 2010)
ISBN-10: 0816529299
Mark Santiago
The quiet of the dawn was rent by the screams of war. Scores, perhaps hundreds, of Quechan and Mohave warriors leaped from concealment, rushing the plaza from all sides. Painted for battle and brandishing lances, bows, and war clubs, the Indians killed every Spaniard they could catch. 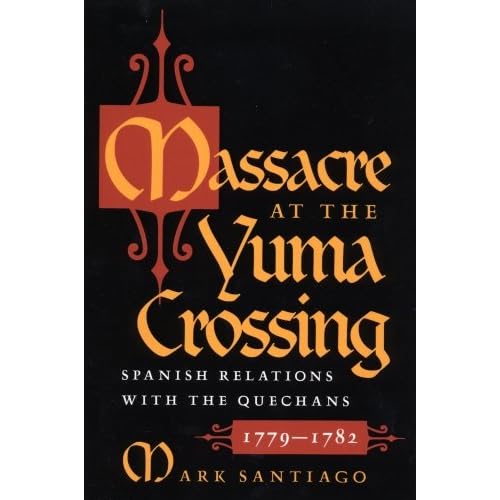 The route from the Spanish presidial settlements in upper Sonora to the Colorado River was called the Camino del Diablo, the "Road of the Devil." Running through the harshest of deserts, this route was the only way for the Spanish to transport goods overland to their settlements in California.
At the end of the route lay the only passable part of the lower Colorado, and the people who lived around the river, the Yumas or Quechans, initially joined into a peaceful union with the Spanish. When the relationship soured and the Yumas revolted in 1781, it essentially ended Spanish settlement in the area, dashed the dreams of the mission builders, and limited Spanish expansion into California and beyond.
In Massacre at the Yuma Crossing, Mark Santiago introduces us to the important and colorful actors involved in the dramatic revolt of 1781: Padre Francisco Garcias, who discovered a path from Sonora to California, made contact with the Yumas and eventually became their priest; Salvador Palma, the informal leader of the Yuman people, whose decision to negotiate with the Spanish earned him a reputation as a peacebuilder in the region, which eventually caused his downfall; and Teodoro de Croix, the Spanish commandant-general, who, breaking with traditional settlement practice, established two pueblos among the Quechans without an adequate garrison or mission, thereby leaving the settlers without any sort of defense when the revolt finally took place.
Massacre at the Yuma Crossing not only tells the story of the Yuma Massacre with new details but also gives the reader an understanding of the pressing questions debated in the Spanish Empire at the time: What was the efficacy of the presidios? How extensive should the power of the Catholic mission priests be? And what would be the future of Spain in North America?
How Ethnically Marginalized Americans Cope With Catastrophic Disasters
Hardcover Edwin Mellen Pr (August 31, 2010)
ISBN-10: 0773436448
Jason D. Rivera
This edited volume explores the experiences of minority groups within American society in the aftermath of disaster.
Focusing on four minority groups, Native Americans, Asian Americans, African Americans and Latinos, contributing authors discuss the various strategies used by these groups to recover from natural and technological disasters.
During the aftermath of natural and technological disasters, often times spiraling human toll, financial costs, loss of livelihoods, and communities left in disarray can often be traced to policies unsuited to the emerging scale of problems.
This volume illustrates the need for policy-makers and emergency planners to develop more culturally competent approaches to implementing planning and prevention strategies within culturally responsive frameworks that ultimately maximize a group's ability to be resilient in the aftermath of disasters.
The editors of this volume believe that his research contributes to the discipline of disaster studies by highlighting social groups within American society and provides insight into how a democratic society can reshape its approach to disaster mitigation in a more socially just manner.
Travelers to the Other World: A Maya View of North America
Hardcover University of New Mexico Press
August 16, 2010 ISBN-10: 0826348882
Romin Teratol Antzelmo Peres (Authors), Carol Karasik (Editor)
Travel writing, the literary exploration of other cultures, has long been a tradition in the English-speaking world. This book turns the tradition on its head and records what is surely the first Maya literary exploration of the United States. 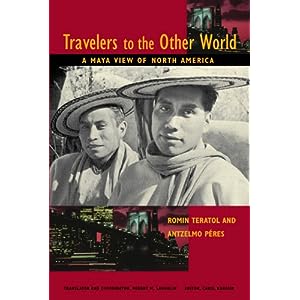 The authors were Tzotzil-speaking Zinacantec Maya who accompanied Robert Laughlin, the compiler of "The Great Tzotzil Dictionary of San Lorenzo Zinacantan", on two trips to the United States. These were action-packed journeys. On the initial voyage, in 1963, they were in the United States for the assassination of President Kennedy.
'The murderer had never met the President. He never had spoken a single word to him. He didn't even know him!' one of the Zinacantecos reports.
They also met Margaret Mead at an American Anthropological Association meeting and flew on their first plane, which they referred to as a 'buzzard machine'.
On the second trip, in 1967, they visited the Navajo and Zuni reservations, stormed the Pentagon with a protest march, and met the Mexican actor Cantinflas, who had just had a facelift.
It took Laughlin several years to persuade his companions to write about their travels. Laughlin notes that Romin Teratol confided to him before returning to Zinacantan, 'If I tell people what I saw, nobody will believe me.'
Published here with Laughlin's more academic account of his introduction to life among the Zinacantec Maya, these remarkable travelogues shed light on both Maya and American societies.
Posted by Raymundo Eli Rojas at 9:34 AM