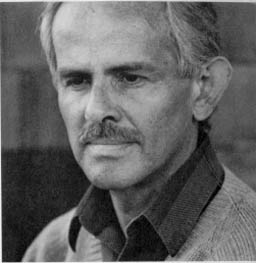 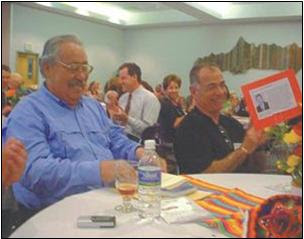 Words are the poet’s stock-in-trade; no one knows the power of words like poets and writers. I believe in the power of the word. Lalo Delgado had an abiding faith in the power of the word. Proof of that faith is manifest in the thousands of words Lalo Delgado wrote and left for us in his poetry and prose, much of it still unpublished. I’m reminded here of the 19th century American poet Emily Dickenson who in her lifetimes only had one poem published and left a trove of unpublished works.

It appears that God so understood the power of the word that He scattered humankind over the face of the earth and separated them by a diversity of languages so they could not longer work together as one people. Did humankind speaking one language threaten the eminence of God? Is that why He diversified humankind by separate languages? Or was it that God saw in the one language that humans spoke a narcissistic threat to the human race in their zeal to become like God?

It doesn’t matter — we have since then come to understand the power of language. Palabras are indeed food for the soul.

Nevertheless, Abelardo Delgado holds the distinction of being the first Poet Laureate of Aztlan.

There’s a popular expression that one doesn’t get a second chance to make a first impression. I was impressed with Abelardo Delgado from the moment I first met him in the early 60’s. However, my most memorable moment of him was when he was doing a reading in South El Paso during the Cabinet Committee Hearings held there in in October of 1967 — that was 45 years ago. I was covering the hearings for The Nation Magazine in New York (December 11, 1967). By this time, Abelardo was already committed to the movimiento. There was something about his poetry que pegaba urgently but not roughshod. To me, that perhaps best characterizes Abelardo Delgado’s poetry and persona.

At first glance, he appeared larger than he really was, not because of his girth but because of how he stood and projected himself. I don’t recall ever seeing Lalo without a smile, a smile that was at once disarming mientras que paloteaba. His poetry is at once both a challenge and an assurance. In Stupid America he is chiding America while at the same time reaching out to embrace it in the spirit of confraternity.

This is what is most enduring about Abelardo’s poetry. It invites one to participate in its unfolding. For example. In Stupid America the persona of the poem (we may assume it’s Abelardo) starts the introit to the poem like the Duke in Robert Browning’s My Last Duchess:

Stupid America, see that Chicano
With a big knife
On his steady hand
He doesn’t want to knife you
He wants to sit on a bench
And carve christfigures
But you won’t let him.

Enganchado, the reader is drawn deeper into the poem with another recitation:

Stupid America, hear that Chicano
Shouting curses on the street
He is a poet
Without paper and pencil
And since he cannot write
He will explode.

The unfolding here starts out like the first recitation but takes an unexpected tack in its comparison that leaves the reader poised to draw the inevitable conclusion of the last strophe.


Stupid America,
Remember that Chicanito
Flunking math and English
He is the Picasso
Of your western states
But he will die
With one thousand masterpieces
Hanging only from his mind.

The structure of the poem reminds me of the 19th century English poet Robert Browning’s Rabbi Ben Ezra who takes his pupils on a mental journey, saying “Come, grow old along with me, the best is yet to be; the first for which the last was made . . .” Except that in Abelardo’s poem “the first” cannot actuate “the last” because the Chicanito “will die” and we can only imagine his potential as a “Picasso of your western states.”

This is hardly the work of “archaic” poets as Gary Soto has characterized Delgado, Sanchez, Alurista, and Gonzalez. That’s like saying Shakespeare is an archaic poet. He may be of a distant generation, but he still speaks to the ages as Ben Jonson knew. About the works of these poets, Soto adds, “they were not very well written(Partial Autobiographic Interview with Twenty Chicano Poets, Wolfgang Binder, ed., Germany: Palm & Erlangen, 1985; 198). Stupid America strikes me as an extraordinarily well-written poem with structural integrity in the best tradition of poetics as I have indicated in my comparison of Delgado and Browning.

The tendency in American poetry has been toward introspective angst-ridden autobiographic pieces. Chicano Movement poetry of the 60’s, starting with Corky Gonzalez’ epic I am Joaquin, deconstructed that tradition while serving as countertexts to dispel the images of Chicanos in mainstream privileged texts. Chicano writers, particularly Chicano poets, construed their responsibility: to identify the enemy, promote the revolution, and praise the people. Early on, these were the threads Abelardo Delgado established in his poetry. He was a people’s poet. He carried the fire of their aspirations in his heart.

It was a big heart: Abelardo’s. At the end of the 60’s and the early 70’s, Abelardo’s view of Chicanos and mine were identical though I expressed my view principally in prose. After World War II, during my studies at the University of Pittsburgh, I had aspirations to be a poet. I wrote much poetry during the 50’a and in the early to mid 60’s read my works with many El Paso poets including Abelardo Delgado and Jesus Rafael Gonzalez. And though I joined Cesar Chavez’s efforts early in the 60’s, I was not a Chicano poet -- I was a Chicano writing poetry.

In 1964, Paso del Norte Press brought out a chapbook edition of my poetry entitled Sangre y Cenizas in Spanish. In 1952, my early work The Wide Well of Hours (Pittsburgh: New World Society) was in English. Neither of those works are movement poetry though the latter deals with the angst of a larger humanity while the former entails a highly stylized anguish of recollection.

The first movement poem I essayed was Hijos de la Chingada published in Nosotros Magazine in El Paso in 1970. The poem brought upon me the wrath of many Chicano formidables in the community who, like Plato in his Republic, thought my poem was a corrupting influence on Chicano students at the University of Texas at El Paso, especially since I was then Director of the Chicano Studies Program and expected to set the standards of decorum for the students.

Abelardo Delgado and Ricardo Sanchez came to my rescue. They defended me publicly as a Chicano and defended my First Amendment right to express myself as I had. Of course there was nothing subversive or salacious about the poem. I was simply expressing the case already proffered by the Mexican poet Octavio Paz that mejicanos (los mestizos) were the offspring of an indigenous mother and a Spanish father eiconicized by the historical figure of Malintzin (later called Doña Marina), the Tlaxcalan woman who became Cortez’s consort and whose child with him has been historically considered the “first” Mexican mestizo. Thus, the word malinche (with the semantic weight of “traitor).

Octavio Paz posited that ever since, mejicanos have thought of her as la Chingada — the violated one (but that she deserved it because of her treason). I don’t side with Octavio Paz’s rendition of that historical event. Nevertheless the symbolism of Malintzin and mestizaje is powerful and closer to the reality of Chicano origins as Malintzin’s children than Coronado’s children. I made that point in my piece on “Montezuma’s Children” in 1970 (The Center Magazine, November/December), a scathing piece on the shameful condition of Chicanos in American education and recommended for a Pulitzer that year by Senator Ralph Yarbrough of Texas who read the piece into the Congressional Record.

In 1971, Abelardo Delgado and Ricardo Sanchez both came to work at Chicano Studies at UTEP where I was Director of the Program. Even then, Abelardo had interests in Denver where he was closely allied with Corky Gonzalez and the Crusade for Justice. Though ostensibly different from each other poetically, Delgado and Sanchez are really two sides of the same coin. Their poetic focus is on the people and their plight. Sanchez is the old-testament voice in the whirlwind; Delgado is the ole-testament shepherd waiting for the comforting voice of God.

Just before he died I sent Lalo a brief note in which I said:

“Im sorry you’re ailing, old friend. At 78 God is not yet through with me and God still has many things for you to do. Todavia queda mucha lucha. During a Summer Session at UT Brownsville I used Stupid America in one of the Sabal Palms Lectures I delivered there. The audience responded to the poem just as we all did when you first wrote it almost 40 years ago. Your work in Chicano poetry will stand as a testament to struggles we’ve endured as Chicanos in proclaiming our presence in this country; and your poetry will stand as the legacy you’ve bestowed on our progeny.”

Posted by Raymundo Eli Rojas at 8:39 AM No comments: Links to this post