Mas than Menos: An Interview with René Saldaña, Jr. on his new book "A Good Long Way" 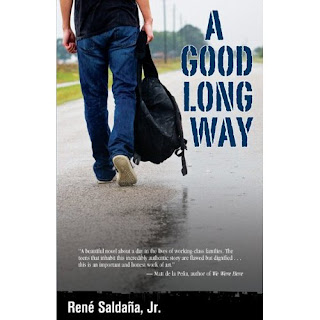 Mas Than Menos
An Interview with René Saldaña, Jr. on his new book A Good Long Way

A Good Long Way is a new YA novel off of  Arte Público/Piñata Books. A day in the life of three teens from the valle de Tejas is given as the teens confront running away, domestic violence, dreams, and parental intrusion. René Saldaña, Jr. shows readers teens who want to escape home, while at the same time, gain understanding of what is "home." With almost half of raza teens dropping out of high school (even some very close to graduation), Saldaña confronts the often dramatic lives of teens, even dramtic for a small Texas town.

Raymundo Eli Rojas (Rojas): René, for those who are unfamiliar with you and your works, can you tell us a little bit about yourself? Where were you born and raised? Education? Where are you living now? Anything else you want to share.
René Saldaña, Jr. (Saldaña): Presently, I’m living and working in Lubbock, TX, with my family: my wife, Tina, our boys Lukas, Mikah, and Jakob, and a ton of animals: three cats, a dog, a rabbit, and a tankful of fish.
But it’s deep South Texas where I’m originally from. I was born in McAllen in a clinic, which most recently has been converted into a sort of storefront church. Back in the late 60s when I was born, my folks tell me I cost them a whopping $90, mas o menos. For my own emotional well-being, I keep telling myself it was mas than menos.
﻿
﻿

Notice, I’m not mentioning any Latino/a writers. I didn’t even know I should’ve been looking out for Mexican American writers. How weird is that since I grew up in a region much like El Paso: brownskins all around, you know. I didn’t even get to read Anaya’s Bless me,Ultima

. But I’d have to credit Baldwin’s Go Tell It On The Mountain

and “Sonny’s Blues” as an early influence. And then later, his Another Country

blew me away.
And later, when I was looking for brown writers, I was given a copy of Magic of Blood

by Dagoberto Gilb. This is in the early late, late 1990s, very early 2000s. And talk about a book that caused me to think of writing in a whole different way, a writer who thought very highly of his craft.
Rojas: I always ask these to all authors/poets: What did this last decade bring to Chicano(a) Literature?
Saldaña: To me, it has to be the emergence of a younger reading audience, who are in great need of knowing we have a literature that deals with them directly. That we make up part of the greater American tapestry, like Gilb (see Pluma Fronteriza's interview with Gilb) has said before, that our literature is also a part of that tapestry. It isn’t something to be dismissed or disqualified. It is something serious, but if we want our kids to grow up “knowing” we’ve got to ensure that they’re reading us in and out of class.
Rojas: Can you give us a name of one Chicano(a) writer, poet, or playwright whom we should be paying attention and why we should be paying attention to them?
Saldaña: Gilb, most definitely. I think of him as a true craftsman. A writer never satisfied with a work until it’s been worked over and again and again until it’s ready. He’s writing about very real Mexican Americans, a working-class Chicano like no one else is writing about. Tomas

, but for a different Mexican American, the migrant worker. It’s raw and gritty writing. It’s gripping, what he’s doing with these characters and their lives. He’s writing their everyday lives, but about something deeper at the same time.
Writers, too, can learn a great deal from his writing: how he puts stories together, how he uses flashbacks, how he ends his stories. All of it is intentional and so meant to be looked at consciously and carefully. Look at “Where the Sun Don’t Shine” or “Al in Phoenix” (both stories in Gilb's Magic of Blood

) for his ars poetica. We’re not reading him in high school like we need to be doing. In college. Outside of school just because.
Rojas: Can you give us a name of a veterana(o) writer we should be paying attention to, and why?
Saldaña: One of our greatest poets, our wisest voices, raulrsalinas. It’s sad he died, but he left behind a wealth of words. I had the joy of knowing him, watching him present at readings and schools, and that vato could command an audience, even a high school gym filled with teens who seemingly don’t care about anything.
And this one group I’m thinking about specifically was spell-bound. He had, and continues to have a great wisdom to share. I wish we were studying his poems more and more in regular lit classes and not just in Chicano studies classes. This poet will go down in history as one of the best poets, period. Not Chicano or Indio or Brown or Pinto, but POET, punto final.
Rojas: Our readers like to know if our spotlighted writers are human, so if you watch TV what are you watching on TV nowadays, and what is the last movie you saw?
Saldaña: I love The Biggest Loser, and my wife and I can’t miss Parenthood, which is such smart writing.
Rojas: What are you currently reading?

, though I don’t think it’ll be as good a read as Kavalier and Clay

Rojas: René, thanks for granting us this interview.

How bad is Sandra Cisnero's Bad Boys?, a review of the Mango Publication's classic chapbook.

Posted by Raymundo Eli Rojas at 9:43 AM