Who Is Javier Sicilia? 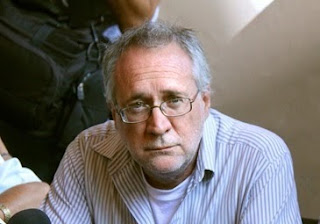 Who Is Javier Sicilia?
Even before his son's death, poet advocated poetry in action
Share
A rally, a march, and many other events are happening in El Paso today and tomorrow due to the visit of Mexican poet Javier Sicilia.

Drug gang members killed Sicilia's son in March of this year. In response, Sicilia has been leading protests and marches all over Mexico asking for an end to the violence.
Before the violence started in Mexico, or at least the extreme violence, and before Sicilia's son was murdered, Sicilia was a renown poet.
Although “poet” has been attached to his name, it is not the only genre in which Sicilia writes. He is also a journalist and essayist. Sicilia has also written for film, served as editor of Poesia Magazine and serves as professor of literature, aesthetics and screenwriting at Universidad La Salle at Cuernavaca

Sicilia was born in Mexico City n 1956. His father was an immigrant to Mexico from the Canary Island. His father was a poet, though a private one, it was through his father that Sicilia gained interest in poetry.
Sicilia's Catholisim has also played a role in his life and he mixed his religion with social activism. Sicilia worked with Sergio Méndez Arceo, Bishop of Cuernavaca, considered a pioneer of Liberation Theology..
He was influenced by Guiseppe Lanza del Vasto, a Sicilian who when to live with Mahatma Gandhi in India. It was Gandhi that led Lanza del Vasto to follow the philosophy of nonviolence, as Sicilia would do later. Sicilia would visit some of the Gandhian style communities, Lanza de Vasto founded in France. Other influences include Ivan Illich, St. Teresa de Avila, and John of the Cross.
In 1994, Sicilia founded Ixtus magazine in which he critiqued modern society using the Gospels as a foundation. According to Martha Molina, Sicilia published an issue of Ixtus called “The Poetry of Action” preaching his philosophy:
“One of the issues of Ixtus was titled “The Poetics of Action,” a very Gandhian title. Jean Robert tells us that Javier was inspired by a disciple of Lanza del Vasto named Pierre Soury, who believed that there was a primitive language that had to be recuperated. “From there, we go to the etymology of the word, poetry (poiesis, poieo), which means ‘I do,’” he says.
Poetry is action, and in Javier it has become a nonviolent action created by words. Sicilia said that he would not write any more poetry after the brutal assassination of his son. But he is writing poetry although without a pen; he is doing, he is taking action.
The German poet Friedrich Hölderlin said that “man inhabits poetically,” and, as such, to inhabit a place is to be a poet. But that is not sufficient. One has to find the way to inhabit that place. Javier has done that. He has achieved a realization of poetry converted into action. And as the Situationist Raoul Vaneigem said, poetry seldom occurs in poems, it only occurs when words stimulate action.”

Sicilia was also a supporter of the peace dialogue that followed the Zapatista uprising in Chiapas and he visited Chiapas to defend the right of the indigenous. In 2001, he combated urban renewal in Cuernavaca where developers wanted to destroy the Casino de la Selva, a building in that had murals and artwork to replace it with a mall. In 2009, he founded the magazine Conspiratio.

Friday, June 10 · 4:00 pm - 6:00 pm
Armijo Park on 8th and Campbell in Downtown El Paso
June 10th March in Ciudad Juárez
El Paso group will meet at 4:00 pm in the park in front of Armijo Library (8th and Campbell Street) and walk together across the Stanton Street Bridge to meet the Cd. Juarez group at Avenida Lerdo.
...
IF YOU ARE COMING ON THE MARCH, PLEASE CONSIDER THE FOLLOWING:

* PLEASE BE SURE TO HAVE A HAT, SUNSCREEN, AND WATER. IT WILL BE VERY HOT AT THIS TIME

* YOU WILL NEED YOUR PASSPORT TO CROSS BACK INTO THE US.

* PLEASE CARRY SIGNS AND BANNERS DISCREETLY UNTIL WE CROSS THE BORDER AND MEET WITH THE JUAREZ GROUP.

* PLEASE REMEMBER THE PEACEFUL NATURE OF THE MARCH, AND RESPECT YOUR ROLE AS A FOREIGNER IN MEXICO.

* PLEASE CONSIDER FORMING GROUPS (BUDDY SYSTEM) TO WALK TO MONUMENT, AND WALK BACK ACROSS BRIDGE. TO WALK BACK YOU WILL NEED TO CROSS AT THE SANTA FE BRIDGE (EL PASO/JUAREZ STREETS). STANTON STREET BRIDGE IS ONE WAY.

Maps of the march route and back to bridge and will be districuted at Armijo Library.
Please feel free to call me with any questions Kerry (915) 252-9311.

In January of this year, poet Susana Chávez was brutally killed in Juárez. She was the first poet who fell victim of Calderon´s and Washington´s dirty war.