This beautiful, bilingual chapbook involves two brothers in the last days of their mother's life, every new day expecting it to be her last.

It is snowing outside, which Cadena describes with precision. The family is from the Mexican state of Michoacan. Their mother came with their father up north, presumably the United States, and started a grocery store. Their father died and the grocery subsequently failed. 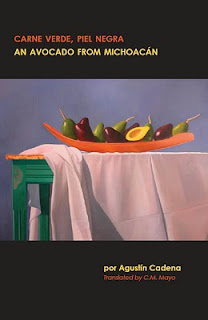 It's failure and the family's financial status, prohibited them from returning to Michaocan. Who knows if they intended to someday return to Mexico, but the return, with exception of a visit or two, never came to be.

Like Charles Foster Kane's “Rosebud,” the narrator's mother is thinking of much better times in her homeland which she envelopes in her craving for an avocado. It is not just any avocado – but an avocado with deep green meat and black skin – from Michaocan.

In beautiful imagery and prose that twists your heart as your read it, Cadena is able to put into words the longing for one's home country, that even I, a Chicano felt. Cadena accomplishes in prose what Chucho Monge and José López Alavéz do in song: “Mexico Lindo y Querido” de Monge and “Cancion Mixteca” de Lopez Alavez.

Like many other canciones rancheras (“Mi Ranchito,” “Cuatro Milpas,” etc.), Cadena shows us that depression of being far away from the place of your birth and longing for it.

The torture of not being able to go back is felt as the narrator remembers how his mother would receive letters from Mexico concerning the death of family members, letters that would bring her to tears.

This is a torture of not being able to return, tortures that current Mexican immigrants in the United States feel. It use to be easier, but expensive, to cross and recross the border even if illegally.

Though Cadena does not mention the immigration status of the family, with more Draconian border enforcement and border obstructions and the harsh human-killing desert, the border is our modern-day Berlin Wall, our 38 parallel keeping loved ones apart, and an even larger monetary investment to cross.

But unlike Monge's “Mexico Lindo,” many, like the narrator's mother, are neither taken back to their homeland in their last days, nor after their death. And no avocado. Cadena's narrator give readers that feeling of not being able to fulfill a loved one's dying wish.

After the Spanish original, and C.M. Mayo's translation, the chapbook contains a small bio of Cadena and an interview by Mayo with Cadena. Among Cadena's answers to Mayo's inquires, this jumped out at me:

Mayo: What is your advice for young writers?

Cadena: They should study economics, law or engineering, or open a grocery store. The important think is to be able to make a living from something other than literature. This way they don't have to sell-out, become camp-followers of some bureaucrat, or beg for grants, or compete against their colleagues tooth-and-nail for some privilege. It is very sad to see and there are many writers like this.


Raymundo Eli Rojas is the editor of "Pluma Fronteriza" a publication spotlighting Chicano(a) and Latino(a) writers from the Cd. Juarez, El Paso, Las Cruces region and "Libros, Libros." He is a community organizer with Unidos Vecerimos and graduate of the University of Texas at El Paso and the University of Kansas School of Law.
Compiling List of Chapbooks by Chicano(a) and Latino(a) Writers and Poets Published 2000-2009 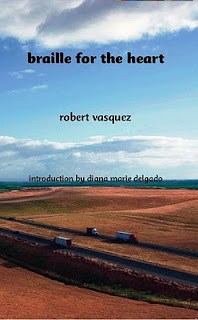 Pluma Fronteriza is compiling a list of Chapbooks by Chicano(a) and Latino(a) Writers and Poets Published 2000-2009. If you are a publisher or the author of a chapbook, please let us know the title, year, and publisher (if you have one).
Self-published chapbook are also welcomed. Please email this info to Ray Rojas at rayerojas AT gmail.com.

Many of you followed Ben Saenz feature on PBS NewHour. The show has posted more of his poems including: Meditation on Living in the Desert, No. 11; Ode to Juarez, No. 5
/This is where we live/; and Juarez: The Last Ode /Spring/, all with the audio download. READ AND HEAR MORE.
Interview Pat Mora
We came across a 2008 interview with Pat Mora by Teachingbooks.net regarding children's books: Mora says, "There hasn’t been enough change in the range of voices that you find in children’s
and young adult books. About 14% of public school children today are Latinos, and yet only
about 2% of children’s books are about Latinos. I don’t understand why we are not seeing a
dramatic increase. Publishers should be excited about publishing more Latino authors and about
providing books not only for Latino children, but for children who are in school with Latinos and
want to learn about that culture." Download this interview at: http://www.teachingbooks.net/content/Mora_qu.pdf
Granados' Teen Stories
Project Muse posted the following abstract:
Project MUSE - American Book Review - Teenage Stories Project MUSE Journals American Book Review Volume 31, Number 2, January/February 2010 Teenage Stories American Book Review Volume 31, Number 2, January/February 2010 E-ISSN: 2153-4578 Print ISSN: 0149-9408 DOI: 10.1353/abr.0.0038 Teenage Stories Christine Granados Live From Fresno Y Los, Stephen D. Gutierrez. Bear Star Press: http://bearstarpress.com. 118 pages; paper, $16.00.
The Chicano literary movement in the seventies was about allowing Mexican American voices free expression, which meant that there was a bias against shaping or editing or revising. What counted then was immediacy, rawness, and reality of voice.
The question to ask after reading a twenty-first century Chicano writer is whether or not the narrative on the page is more valuable when told in the raw, natural voice of a human person telling you a story, or is the better tale that raw voice refined, shaped, polished, and pushed to some kind of purpose?
Gutierrez's book Live from Fresno y Los begs the question. Rather than letting thoughts fly in a flurry of essays, recollections, and meager short stories as in his first book elements (1997), Gutierrez refined and shaped his unique voice and produced seven separate accounts set in Los Angeles and Fresno, where...
end of abstract: READ ON THE WEB
Christine Granados is author of Brides and Sinner in El Chuco.
Revolutionary History
Ramon Renteria's article: "A walk through history: UTEP effort highlights Hispanics' significance" highlights several El Paso historians and thier incide concerning the importance of El Paso to the Mexican Revolution. See photo's of David Romo, author of Ringside Seat to Revolution, giving a tour.

(El Paso Times) Above, David Romo
UTEP history professor and author of Children on the Border: 1880-1930, Yolanda Chávez Leyva, "El Paso has this incredible legacy of buildings tied to the revolution that no other city can claim," READ MORE.
Blog Updates: Troncoso and Mayo
Please check out Sergio Troncoso's Chico Lingo blog. He put out a new post today. C.M. Mayo had a guest blogger on her blog with important tips for writers: Guest-blogger Writer and Writing Coach Eva Hunter on 5 Ways to Avoid Writing.
==========
Your juarense calo for today is: chorita le digo - Ahorita le digo. Albur, vease chora. I'll tell you in a second. Double meaning, see chora.
chora - Pene. Penis
--- Glosario Del Calo de Cd. Juarez, Ricardo Aguilar
The link we share with you today is: Healthy Use of Mice and Keyboard.

Posted by Raymundo Eli Rojas at 9:34 AM